I suddenly have a craving for popcorn at this early. It is already breakfast time here at my end but instead of a full meal, I feel like just having some popcorn. Does it sound no sense to you? I got used to skipping a full meal every breakfast time. Two slices of bread and a cup of coffee will do but this morning, I could use a bowl of popcorn. It is just appropriate for I am planning on watching the last few episodes of an Asian drama I've been following for a week now. Isn't a bowl of popcorn perfect for TV or movie time?

If only our microwave oven still works, I have had my cravings satisfied already. But sadly, it was broken couple of years ago and haven't got a replacement for it yet. I used to stock my fridge with microwave popcorn since it is the fastest and easiest way I know to prepare a bowl. What's more convenient is you only need a microwave oven for it. With its easy preparation steps, you'll get your popcorn popped and ready to eat in just a few minutes. It is funny, since we have no oven anymore, my mother suggested I do the manual popping of corn and oh, it isn't easy. I'd rather buy popping corn sold in stores nearby.
on February 26, 2013 No comments: Links to this post

I have not seen my younger sisters for two weeks now. The last time we were all gathered together was on our father's 40th day after death. We all visited father's grave, lighted some candles and said our prayers for his eternal rest. After that day, them two went back to the city for school and work and I have not seen the two of them visiting us here in Manukan after that. We haven't bonded like we used to when I was still living in the City close to them. Now I miss the city life...though I am all set here in Manukan living a busy life helping my mother watch her small store and playing Wartune. 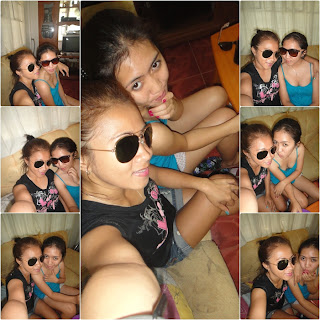 I can't wait for the school vacation so we three can again bond. I miss swimming in the sea with them.
on February 24, 2013 No comments: Links to this post

Email ThisBlogThis!Share to TwitterShare to FacebookShare to Pinterest
Labels: The 3chies

In 2007, the Faculty of the University of Newcastle, presented to Dr Susan Lim, at a graduation ceremony in Singapore, an honorary degree, Honorary Doctor of the University of Newcastle, Australia. Dr Lim was the first surgeon to perform a successful cadaveric liver transplant in Singapore and in Asia. Dr Lim, a general surgeon with a special interest in transplantation and cancers provided urgent medical care to two Australians from Newcastle following the second Bali bombings in October 2005. For this work, Dr Susan Lim received mention in the Australian Parliament Official Hansard.

Acting Vice-Chancellor, Professor Barney Glover said, "This is the fifth consecutive year in which the University has held a graduation ceremony in Singapore, and at which Dr Susan Lim was honoured".

In 2011, in the presence of the Minister of Health Khaw Boon Wan of Singapore, Dr Susan Lim was honoured as one of 100 distinguished women globally to be featured in the 100 Women book project at the Alumni's Annual dinner event. It was also the first year that the new vice-chancellor Professor Caroline McMillen presided over this function, following her appointment in October 2011.
on February 02, 2013 10 comments: Links to this post